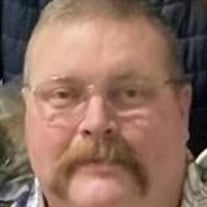 Brent Eugene Urton, 52, passed away unexpectedly on February 2, 2022 at his home in Newark, Il. Brent was born on October 29, 1969 in Joliet, Il to Harvey and Carol Marie (Miller) Urton. He was a 1987 graduate of Yorkville High School. While attending Joliet Junior College in 1988, he met the love of his life, Sheila Marie Dehm. They were married on July 22, 1995. Brent served on Lisbon-Seward Fire Department Co. 2 as a young adult, was a proud member of the Plainfield Ambulance Department, and worked as a dispatcher and Director of Communications at Air Angels Medical Transport in West Chicago. Brent enjoyed a variety of hobbies, from farming to woodworking to barbecuing for community and church events. He loved watching his kids pursue their own passions, sitting front row at musicals and concerts, as well as on the sidelines at track and cross country3 meets. Brent is survived by his wife, Sheila Marie, and their two children, Danielle Marie and Wyatt of Newark, Il; his parents, Harvey and Carol Urton of Yorkville, Il; brother Richard Urton of DeKalb, Il; Aunt and godmother Joyce de la Torre, and numerous cousins. He is also survived by his mother-in-law, Judy Dehm, her children and their spouses and three nephews. Brent was preceded in death by his grandparents, Richard and Hazel Mae (Frank) Miller and Frank and Reva (Roberts) Urton; his two uncles Paul and Merlin Urton, and his father-in-law, George Dehm. Visitation will be held from 10:00 a.m.to 1:00 p.m. on Saturday, February 12 at New Life Church in Yorkville, with Celebration of Life immediately to follow. Masks will be required at firm request of the family. In lieu of flowers, memorials may be directed to Morris Community Dialysis and St. Jude’s Children’s Research Hospital. Fruland Funeral Home, 121 W. Jefferson St. in Morris is in charge of arrangements. For more information, call the funeral home at 815-942-0700 or sign the online guestbook at www.frulandfuneralhome.com.

Brent Eugene Urton, 52, passed away unexpectedly on February 2, 2022 at his home in Newark, Il. Brent was born on October 29, 1969 in Joliet, Il to Harvey and Carol Marie (Miller) Urton. He was a 1987 graduate of Yorkville High School. While... View Obituary & Service Information

The family of Brent Eugene Urton created this Life Tributes page to make it easy to share your memories.

Send flowers to the Urton family.