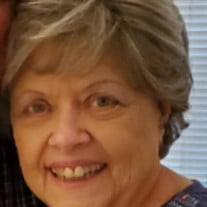 Carole A. Eddy, of Cape Coral, Florida (formerly of Morris, IL), crossed over peacefully on Sunday, August 29, 2021, at her home with her loving family by her side. Born in Pueblo, Colorado, she was the daughter of Elmer and Gloria McIntyre. She was educated in Texas and Minooka grade schools and graduated high school in Morris, IL in 1964. After high school, she attended Marycrest Business School. She had various jobs throughout her early years including, Weitz Café, Hornsby’s, National Tea Company, and U.S. Land Company. She spent many years working at Root & Adcock, Attorneys at Law, was a real estate appraiser for First Midwest Bank, and a legal secretary for other various law firms. She worked for the Grundy County Courthouse as Deputy Circuit Clerk under one of her best friends and mentor, Rose Marie Bell, for many years. Upon leaving the courthouse, she opened her gift store, My Favorite Things, which later transitioned into a scrapbook store until she officially retired to become a full time Nana. She adored spending time with her children and grandchildren, but most of all traveling with her husband as a snowbird to Florida. For years, she served as a den mother and troop leader for her children’s scout troops and served on the board of Trailways Girl Scout Council. She was Queen Mum in her Red Hat Society group. She also loved to craft, making several scrapbooks over the years and beautiful greeting cards. Carole leaves behind her loving husband of 54 years, Vincent Eddy, of Cape Coral, Florida; daughters, Courtney (James) Nixon of Ottawa, IL, and Candyce (Robby) Connor of Cape Coral, Florida; grandchildren, Chance and Paisley Nixon of Ottawa, IL and Gage and Mason Connor of Cape Coral, Florida. Also surviving include her brothers, Michael (Terry) McIntyre of Ottawa, IL, Bruce (Margo) McIntyre of Morris, IL, Richard (Anne) McIntyre of Allen, TX, numerous cousins, nieces, and nephews, and many special extended family members, including her “sister”, Donna Gorman. She was proceeded in death by her beloved son, Christopher Eddy, her parents, aunts, uncles, cousins, and her “sister”, Sandra Severson. Visitation will be held at the Fruland Funeral Home, 121 W. Jefferson St., in Morris, IL, on Monday, September 6, 2021, from 5:00 – 8:00 p.m. Funeral services will be held on Tuesday, September 7, 2021, at 11:00 a.m. with Pastor Kevin Yandell officiating. Interment will follow at Evergreen Cemetery. In lieu of flowers, the family has asked that memorials be made in Carole’s name to New Community Christian Church of Morris, IL. For more information, call the funeral home at 815-942-0700 or sign the online guestbook at www.frulandfuneralhome.com.

Carole A. Eddy, of Cape Coral, Florida (formerly of Morris, IL), crossed over peacefully on Sunday, August 29, 2021, at her home with her loving family by her side. Born in Pueblo, Colorado, she was the daughter of Elmer and Gloria McIntyre.... View Obituary & Service Information

The family of Carole A. Eddy created this Life Tributes page to make it easy to share your memories.

Send flowers to the Eddy family.