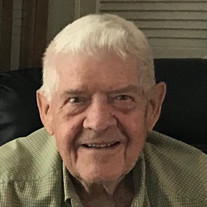 Curtis O. Rasmusson, 92, passed away peacefully at home on Sunday, November 14, 2021, surrounded by his family. He was born on January 14, 1929, to George Arnold and Ruby (Larson) Rasmusson. Curt attended Gore School, Mazon High School, and Morris High School, graduating in 1946. He was drafted into the Army in 1951. He was united in marriage to Esther Monke on April 26, 1952, in Harvel, IL. Two weeks later he was deployed to Korea for nine months. Curt farmed in Morris his entire life. He also was a clerk on the Saratoga Township Board for many years, a DeKalb seed corn dealer, and an active member at Bethlehem Lutheran Church. He loved his Lord, family, farming, and his country. Curt is survived by his beloved wife, Esther, of 69 ½ years; his children, Kristy (Steve) Bunge, Connie (Steve) BeMiller, Susan (Jim) Farber, and Eric (Annie) Rasmusson; his eight granddaughters, and four great-grandchildren. Preceding him in death were his parents, an infant daughter, Amy Beth, in 1967, and his brother Leo, in 1972. A visitation will be held from 9:00am-11:00am on Wednesday, November 24, 2021 at Bethlehem Lutheran Church. The funeral will follow at 11:00am with Pastor Patrick Lohse officiating. Interment will follow in Evergreen Cemetery. Military honors will be performed by the Morris Color Guard. Fruland Funeral Home, 121 W. Jefferson St. is in charge of arrangements. For more information called the funeral home at 815-942-0700 or sign the online guestbook at www.frulandfuneralhome.com

The family of Curtis O. Rasmusson created this Life Tributes page to make it easy to share your memories.

Curtis O. Rasmusson, 92, passed away peacefully at home on Sunday,...

Send flowers to the Rasmusson family.