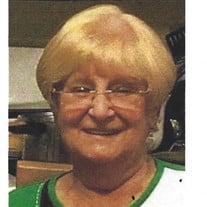 Diane F. VanCleave, 77, of Morris, passed away Wednesday afternoon, January 13, 2021 at the Morris Hospital. Born February 1, 1943 in Morris, she was the daughter of Walter and Helen (Sjostrom) Lumpp. She graduated from Morris Community High School and later attended cosmetology school to become a beautician. For several years she owned and operated her own salon business. She was also employed at Alumax. Diane married Joseph VanCleave on March 14, 1987 in Morris where they lived all of their married life. She is survived by her husband, Joseph of Morris; daughter, Lisa (Matthew) Connor of Loudon, Tennessee; step daughter, Jennifer (Kevin) Law of Clifton, New York; one son, Royce Spencer of West Point, Virginia; five grandchildren, Celina (Jacob) Chase, Scott Spencer, Hailey Spencer, Blane Law and Bianca Law; five great grandchildren; two nieces, Gina Kiss and Jericka Kiss. Preceding her in death were her parents and one brother, Walter “Butch” Lumpp. She was a member of St. Thomas Episcopal Church. Diane enjoyed many hobbies throughout her life including sewing, dancing, playing cards, and growing flowers. She found joy in the little things, was a bit of a rebel, and loved to laugh. She loved spending time with her family and grandchildren. She will be missed ! Memorials may be given to St. Thomas Episcopal Church. A private memorial service for the family will be held at a later date. Fruland Funeral Home, 121 W. Jefferson St. in Morris is in charge of arrangements. For more information, call the funeral home at 815-942-0700 or sign the online guestbook at www.frulandfuneralhome.com.

Diane F. VanCleave, 77, of Morris, passed away Wednesday afternoon, January 13, 2021 at the Morris Hospital. Born February 1, 1943 in Morris, she was the daughter of Walter and Helen (Sjostrom) Lumpp. She graduated from Morris Community High... View Obituary & Service Information

The family of Diane F. VanCleave created this Life Tributes page to make it easy to share your memories.

Send flowers to the VanCleave family.