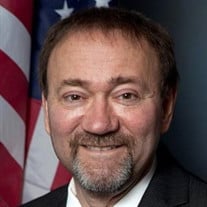 Donald J. Hansen, 60, of Morris, passed away early Monday morning, October 19, 2020 at his home after a long battle with cancer. Born November 9, 1959 in Morris, he was the son of Donald R. (Wanda) Hansen. He graduated from Morris Community High School with the class of 1977. He married Linda Thorson on April 21, 1979 in Morris and they lived all of their married in Morris. For 30 years he was employed at Caterpillar Tractor Company. After retirement he helped run the family business at Honest Abe’s Tap and Grill. He was an alderman for the 1st ward for several years and was serving as the Vice Chairman on the Grundy County Board at the time of his death. He is survived by his wife, Linda; his children, Kady (James)Patterson of Morris, Aren (Jessica)Hansen of Morris, Tara (Joshua) Fullmer of Warrenville and Jacob Hansen of Glenview; four grandchildren, Kyle and James Patterson, James Donald (J. D.) and Emmett Fullmer; his mother, Wanda Hansen of Morris; one brother, James Hansen of Morris; four sisters, Brenda (Mike ) Hextell of Georgia, Dana (Gary) Peterson of Springfield, Karen (Wayne)Kenney of Morris and Kristen (Terry) Torkelson of Morris; several nieces and nephews. Preceding him in death was his father, Donald. Don’s children and grandchildren were his pride and joy. He loved to golf and travel. He coached his children’s youth teams and was an IHSA soccer referee. Memorials may be directed to Joliet Community Hospice or Lurie Cancer Center. Funeral services will be held Friday, October 23, 2020 at 11:00 a.m. at the Bethlehem Lutheran Church with Pastor Patrick Lohse officiating. Visitation will be held on Friday from 9:00 a.m. until 11:00 a.m. The private service will be immediately after at the church. Fruland Funeral Home, 121 W. Jefferson St. in Morris is in charge of arrangements. For more information, call the funeral home at 815-942-0700 or sign the online guestbook at www.frulandfuneralhome.com.

Donald J. Hansen, 60, of Morris, passed away early Monday morning, October 19, 2020 at his home after a long battle with cancer. Born November 9, 1959 in Morris, he was the son of Donald R. (Wanda) Hansen. He graduated from Morris Community... View Obituary & Service Information

The family of Donald J. Hansen created this Life Tributes page to make it easy to share your memories.

Send flowers to the Hansen family.