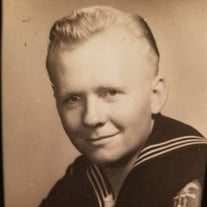 Eugene R. Orton, 94, of Lisbon, passed away Friday, April 2, 2021 at the Morris Hospital. Born April 29, 1926 in Lisbon, he was the son of Elias and Lida (Shurson) Orton. He received his education in the schools of Lisbon. Eugene married Verna Egeland on January 29,1949 at the parsonage of West Lisbon Church. For all of their married life they farmed in the Lisbon area. He also worked for Earl O’Brien Trucking hauling livestock to the Chicago Union Stockyards. He was a volunteer fireman for the Lisbon Fire Department. He was a WW II veteran of the U S Navy and served in the Philippines on a LST. He is survived by his children, Phillip Orton of Bemidji, Mn; Paul (Cathy) Orton of San Luis Obispo, CA and Patty Williamson of Lisbon, Il; three grandchildren, Haley (Jason) Orton, Wyatt and Eli Williamson; great grandson, Kaius Orton; several nieces and nephews. Preceding him in death were his parents; grandson, Matthew Orton; son-in-law, Gary Williamson; three brothers, Orville, Laverne, and Duane Orton; one sister, Evelyn Gunnerson. He was a lifelong member of the Lisbon Bethlehem Lutheran Church and served on various church boards, Kendall County Food Pantry for 20 years, Kendall County Farm Bureau, and American Legion. He was a draft horse enthusiast and enjoyed antique tractors. Memorials may be given to the Pacific Garden Mission or donor’s choice. Funeral services will be held Friday, April 9, 2021 at the Lisbon Bethlehem Lutheran Church at 12:00 p.m. with Pastor Steve Larson officiating. Interment will follow in Lisbon Cemetery. Visitation will be held on Friday from 10:00 a.m. until time of service at the church. Fruland Funeral Home, 121 W. Jefferson St. in Morris is in charge of arrangements. For more information, call the funeral home at 815-942-0700 or sign the online guestbook at www.frulandfuneralhome.com.

Eugene R. Orton, 94, of Lisbon, passed away Friday, April 2, 2021 at the Morris Hospital. Born April 29, 1926 in Lisbon, he was the son of Elias and Lida (Shurson) Orton. He received his education in the schools of Lisbon. Eugene married Verna... View Obituary & Service Information

The family of Eugene R. Orton created this Life Tributes page to make it easy to share your memories.

Send flowers to the Orton family.