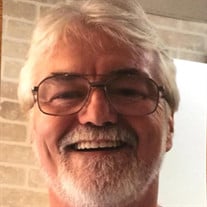 Harold "Mike" Keating, 69, of Morris, passed away Wednesday February 9, 2022 at Morris Hospital with his beloved family by his side. Mike was born January 25, 1953 in Streator Illinois to Harold and Mary Ann (Hodgins) Keating. He was a graduate from Streator High School. Mike had a passion for drag racing, and since childhood, worked on anything he could get his hands on, especially if it was a challenge. More than a career, he spent his life working on cars, after 50 years, he "retired" from Bill Walsh Auto Body in January of 2021. Even after retirement, he continued to work part time at J&M Auto Body in Morris. He often told family that working on cars never got old, and that it was amazing to him that he was paid to do what he loved. He spent hours of his free time building his ultimate drag car. He went to NHRA races, swap meets and car shows, had a gift for gab and wheeling and dealing. Those who knew Mike, knows that his greatest love was for his family and friends. He intentionally pursued genuine connection in his relationships, was always present for activities, get togethers and holidays, and loved his family and friends with his whole heart. He married his first wife, Vickie (Warwick) Olsen on August 21, 1974 and had three beautiful children, Mandy Keating, Shannon (Steve) Mahnke and Michael (Emma) Keating, all of Morris. He later married the love of his life Karen Kjellesvik Downey on November 16, 2012 and was blessed to add Carey Downey and Beth (Ralph) Alverez as a son and daughter. He is survived by his children fourteen grandchildren two great-grandchildren, sister Pat (Ed) Creamean of Wisconsin, step sister Betty Dunn of Arizona, several nieces and nephews, and his three dogs, Daisy, Layla and Molly. Preceding him in death were his parents and his wife Karen on January 19 2022. Funeral Services will be held Wednesday, February 16, 2022 at 11:00 a.m. at the Fruland Funeral Home, 121 W. Jefferson St. in Morris with Pastor Andrew McArthur officiating. Interment will follow in Evergreen Cemetery. Visitation will be held on Tuesday, February 15, 2022 at the funeral home from 5:00 p.m. to 7:00 p.m. For more information call the funeral home at 815-942-0700 or you may sign the online guestbook at www.frulandfuneralhome.com.

Harold "Mike" Keating, 69, of Morris, passed away Wednesday February 9, 2022 at Morris Hospital with his beloved family by his side. Mike was born January 25, 1953 in Streator Illinois to Harold and Mary Ann (Hodgins) Keating. He was a graduate... View Obituary & Service Information

The family of Harold "Mike" Keating created this Life Tributes page to make it easy to share your memories.

Send flowers to the Keating family.