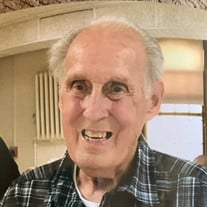 John Lloyd Perry, 85, of Morris, passed away Thursday morning, December 3, 2020 at his home with his loving family by his side. Born July 19, 1935 in Columbus, Nebraska, he was the son of Calvin and Florence (Killham) Perry. He married the love of his life Joan Smith on September 5, 1953. John served in the US Navy from 1953 -1956 aboard the USS Lofberg. He worked at the Federal Paper Board until starting his own business, Grundy County Rug Cleaners. Later worked for his son at Challenger Building Services until his retirement. He also owned the Morris Pool Hall from 1974 – 1978 and was manager of Morris Theater for many years. Nothing was more important than his family and watching his grandchildren and great grandchildren grow up. He always attended any sporting events and school events for their grandchildren and great grandchildren. He also had a love of travel and worked all year to take his family on a summer vacation out West. He was the first of 4 generations of Redskin Football players, Mark, Derek, Brian, Alex and Nicholas Perry. He loved to work and you could always find him because he was always whistling. After his retirement, he worked for his good friends at Black and Black Law firm and they were always so good to him. He is survived by his loving wife of 67 years, Joan; four children, Linda (Douglas) Francois, Eleanor Perry, Mark (Beverly) Perry and Christine (Dan) Learned; ten grandchildren, Danielle (Mark) Matney, Craig Francois, Derek (Kaulema) Perry, Shaina (Alton) Nobles, Angie (Chris) Jarzyna, Brian (Jessica) Perry, Alex (Danielle) Perry, Jessica (James) Arellano, Matthew Learned and Jonathan Learned; twenty Nine great grandchildren; his siblings, Sylvia Close, Mike Perry and Sue Mitchell; sister-in-law, Clara Smith; numerous nieces, nephews and many friends. Preceding him in death were his parents; in laws, Lloyd and Irene Smith; brother, Gene (Marcia) Perry; brothers -in-law, Richard Close, Harry Mitchell and Robert Smith; sister-in-law, Sarah Perry; great grandchildren, Kyale Brown, Elizabeth Matney and Grayson Matney. Funeral services will be held Monday, December 7, 2020 at 3:00 p.m. at the Fruland Funeral Home, 121 W. Jefferson St. in Morris with Rev. Robert N. Sathuri officiating. Visitation will be held on Monday from 1:30 p.m. until time of service at the funeral home. Military honors will be provided by the Morris Color Guard following the service outside on the lawn of the funeral home. For more information, call the funeral home at 815-942-0700 or sign the online guestbook at www.frulandfuneralhome.com.

John Lloyd Perry, 85, of Morris, passed away Thursday morning, December 3, 2020 at his home with his loving family by his side. Born July 19, 1935 in Columbus, Nebraska, he was the son of Calvin and Florence (Killham) Perry. He married the love... View Obituary & Service Information

The family of John Lloyd Perry created this Life Tributes page to make it easy to share your memories.

Send flowers to the Perry family.