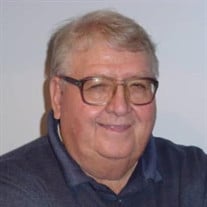 John J. Schneider, 88, formerly of the New Lenox, Joliet, and Coal City areas, passed away Saturday, June 27, 2020, at Park Pointe in Morris, IL. He was born August 24, 1931, at home on the family farm in New Lenox, IL, the son of George and Clara (Eich) Schneider. John was a veteran of the Korean War where he served as an Air Force Staff Sergeant. He was a retiree of Northern Illinois Gas Co. He was a Charter Member of the Knights of Columbus #4400, a member of Cantigny VFW #367, and Ceco Recreation Club. John was instrumental in the start-up and continued operation of the Joliet Knights of Columbus Friday night fish fry from the early 1960’s into the 1980’s. John was a graduate of Joliet Catholic High School Class of 1949, and Joliet Junior College. He was also known to friends as “Duke” and “Big John.” His greatest joy in life was being an avid sportsman, and taught his love for fishing and hunting to his sons, grandchildren, and nephews. Throughout his life he also enjoyed gardening, dancing, playing cards, and cooking. John was very sociable and lived life to the fullest. He is survived by his daughter Kathryn (Thomas) Pouk, and sons Brian (Jane) Schneider, and Edward (Robin) Schneider, grandchildren Krista Davis, Ryan (Kelly) Hitt, Mitchell (April) Schneider, Nicholas Schneider, Justin Engelman, Joshua (Nichole) Engelman, and Elizabeth (Dustin) Heath, 13 great-grandchildren, and numerous nieces and nephews, and sister-in-law Marge Berens. John was preceded in death by his parents, George and Clara (Eich) Schneider; siblings, Edward (Mildred) Berens, Alice (Maurice) Ardaugh, Francis (Marge) Berens, Lavern (Mardel) Schneider, Irma (Harlow) Fox, Doris (John) Smego, and twin brother James (Raquel) Schneider. Visitation will be held at Fruland Funeral Home, 121 W. Jefferson Street, Morris, IL 60450 on Thursday, July 2, 2020 from 4:00p.m. to 7:00p.m. A public memorial service will be held at 7:00 p.m. at the funeral home. Safe social distancing measures will be practiced. Private memorial services will be held at the Abraham Lincoln National Cemetery in Elwood, IL on July 3, 2020. The family would like to thank the Joliet Area Hospice for their committed service and continued care for John, as well as the staff at The Gardens and Park Pointe Rehabilitation Center in Morris, Illinois. In lieu of flowers, memorials to the Joliet Area Hospice would be greatly appreciated. For more information, call the funeral home at 815-942-0700 or sign the online guestbook at www.frulandfuneralhome.com.

John J. Schneider, 88, formerly of the New Lenox, Joliet, and Coal City areas, passed away Saturday, June 27, 2020, at Park Pointe in Morris, IL. He was born August 24, 1931, at home on the family farm in New Lenox, IL, the son of George and... View Obituary & Service Information

The family of John J. Schneider created this Life Tributes page to make it easy to share your memories.

Send flowers to the Schneider family.