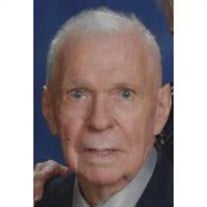 Lawrance E. Knobeloch, 90, of Lisbon, passed away Thursday morning, March 05, 2020 at his home with his family by his side. Born February 18, 1930 in Minier, IL, he was the son of Charles and Selma(Plienes)Knobeloch. He graduated from Minier High School with the class of 1948. He graduated from the Illinois State Police Academy and was employed for over 20 years as a state trooper in district 5 Joliet. Larry served in the US Army during the Korean conflict. He was a farmer, worked at the Lisbon Implement, part owner of Unified Supply and assisted his wife in Marge’s Draperies. He is survived by his loving wife, Marge of Lisbon; his children, Steve(Peggy)Knobeloch of Sandwich, Jerry(Jody)Knobeloch of Sheridan, Tom(Judy)Knobeloch of Colorado Springs, CO, Jay Knobeloch of Seneca, Julia Elliott of Casey, IL and Suzanne (Steve) Holbrook of Morris; 14 grandchildren; 27 great grandchildren; one great great grandson; one sister, Minnie Atkins of Lincoln, IL several nieces and nephews. Preceding him in death were his parents; one granddaughter Abby; two sisters; four brothers. He was a member of the West Lisbon Church where he formerly served as the treasurer, served as Fire Chief at the Lisbon Fire Department and member of the Retired State Police Association. Memorials may be given to the West Lisbon Church or Lisbon Fire Department. The family would like to give special thanks to Joliet Area Community Hospice for their loving care. Funeral services will be held Tuesday, March 10, 2020 at 10:30 am at the West Lisbon Church with Pastor Rex J. Howe officiating. Interment will follow in West Lisbon Cemetery. Visitation will be held on Monday from 5:00 pm to 7:00 pm at the church. Military honors will be provided by the Morris Color Guard. Fruland Funeral Home , 121 W. Jefferson St., in Morris is in charge of arrangements. For more information, call the funeral home at 815-942-0700.

Lawrance E. Knobeloch, 90, of Lisbon, passed away Thursday morning, March 05, 2020 at his home with his family by his side. Born February 18, 1930 in Minier, IL, he was the son of Charles and Selma(Plienes)Knobeloch. He graduated from Minier High... View Obituary & Service Information

The family of Lawrance E. Knobeloch created this Life Tributes page to make it easy to share your memories.

Send flowers to the Knobeloch family.