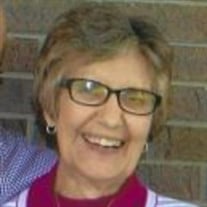 Madonna A. Anderson, 83, of rural Morris, passed away Tuesday morning, March 17, 2020 at her home with her family by her side. Born January 26, 1937 in Morris, she was the daughter of Ernest and Harriet(Johnson)Jacobson. Madonna attended Lisbon Grade School, Newark High School and Northern Illinois University. She was employed for 20 years as an administrative assistant at Minooka High School. On June 20, 1959 Madonna was united in marriage to Gary O. Anderson at the West Lisbon Lutheran Church. They spent 60 years of a loving marriage. They spent many years traveling in the 50 states, Canada, Mexico and Norway. Gary and Madonna were campers. Their passion was the great outdoors and the awesomeness of God’s creation. Madonna loved adventure: from her early youth climbing windmills, trees and on top of buildings, to skiing, mountain climbing, aerobatics in sailplanes, jet helicopter, rafting rivers and most of all being a passenger in the airplane they built together in their garage. Madonna’s family gave her much pride and joy. She is survived by her loving husband, Gary; three sons, Dr. Brad(Caryn)Anderson of Lawrence, KS, Mark(Marina) Anderson of Sonoma, CA and Brent(Andrea)Anderson of Sleepy Hollow, IL; her six grandchildren, Cameron, Eliza, Riley, Connor, Paige and Bailey; her brothers, Conley(Pat)Jacobson of Morris and Leon(Diane)Jacobson of Loveland, CO ; several nieces, nephews and cousins. Preceding her in death were her parents. She was a member of the First United Methodist Church. Madonna enjoyed gardening, cutting the lawn and spending time with her family and grandchildren. Memorials may be given to the First United Methodist Church. A memorial service will be announced at a later date. Fruland Funeral Home , 121 W. Jefferson St., in Morris is in charge of arrangements. For more information, call the funeral home at 815-942-0700.

Madonna A. Anderson, 83, of rural Morris, passed away Tuesday morning, March 17, 2020 at her home with her family by her side. Born January 26, 1937 in Morris, she was the daughter of Ernest and Harriet(Johnson)Jacobson. Madonna attended Lisbon Grade... View Obituary & Service Information

The family of Madonna A. Anderson created this Life Tributes page to make it easy to share your memories.

Madonna A. Anderson, 83, of rural Morris, passed away Tuesday...

Send flowers to the Anderson family.