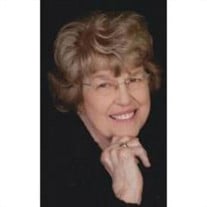 Marcia Anne Gjerde, 77, of rural Morris, died at home and in the peace of Christ on Friday, March 20, 2020, after battling cancer for several months. Born on August 31, 1942, to a Swedish-born farmer, Harold Gustaf Nelson, and his wife, Margaret Louise(nee Weitz), Marcia was raised by her loving parents on a farm in Nettle Creek Township(Grundy County). A lifetime of faith in Jesus Christ began with her baptism as an infant, nurtured by worship and instruction at West Lisbon Lutheran Church. As a child, she attended the one-room Scott School and Lisbon Grade School. A few weeks after graduating from Newark High School, in June of 1960, Marcia began dating Dennis Gjerde, whom she first met at the age of 6 while attending a church women’s luncheon. The couple dated throughout her first year at Illinois State Normal University, where she studied Special Education. They married at West Lisbon Lutheran Church on December 23, 1961. Two sons were born to the union, Kenyon Wayne(1971) and Steven Kent(1974). Marcia completed her bachelor’s degree in 1964. As the first two certified Special Education teachers in Kendall County, Dennis and Marcia founded that county’s special education program, which continues to this day. In 1967, she earned a master’s degree in guidance and counseling. Marcia was an intelligent, kind, and dedicated teacher, with a passion for the fair treatment of children. After teaching at Bristol Grade School for six years, she left the classroom to raise her sons. Then, in 1980, she began work as a reading specialist, serving both Bristol and Parkview grade schools, and eventually leading the Yorkville District Title One program until her retirement in 1991. Marcia loved being a housewife and mother, and she regarded the care of her home as both a calling and a hobby. Her children have all worn clothes and costumes that she lovingly sewed. She enjoyed cooking for her family and won several awards for her baked goods. Blessed with a sharp, mathematical mind, she was a good card player and belonged to the same bridge group for almost 48 years, from 1972 to 2019. She stayed in touch with a wide circle of friends from childhood, work, church, and the places in which she lived, as well as many cousins and other relatives. A confirmed and faithful Lutheran, she served the church as a Vacation Bible teacher and superintendent, a member of the altar guild, and a participant in the Lutheran Women’s Missionary League. She had a beautiful singing voice, and she devoted herself to daily prayer and Scripture reading. She was preceded in death by her grandparents and parents. She is survived by her husband, Dennis; her sons, Kenyon, of the Quad Cities, and Steven(Jane), of Wausau, WI; and four grandchildren; Paul, Anna, Sarah, and Leo. Due to the statewide restrictions on public gatherings, the burial at West Lisbon Cemetery will be private. The Reverend Mark Willig of Friends in Christ Lutheran Church in Morris will officiate. A public memorial will be held at a later date. Marcia’s family would like to thank Pastor Willig and all who cared for her in her final weeks. They also extend their thanks and best wishes to all of her loved ones who meant so much to her, including friends from her youth, neighbors from River Ridge Subdivision, coworkers, her bridge group, the Bristol Bunch, Immanuel Lutheran Church(Yorkville),Friends in Christ Lutheran Church, relatives, family friends, and many more. In lieu of flowers, memorials may be directed to Friends in Christ Lutheran church. Requiescat in pace. Fruland Funeral Home , 121 W. Jefferson St., in Morris is in charge of arrangements. For more information, call the funeral home at 815-942-0700.

Marcia Anne Gjerde, 77, of rural Morris, died at home and in the peace of Christ on Friday, March 20, 2020, after battling cancer for several months. Born on August 31, 1942, to a Swedish-born farmer, Harold Gustaf Nelson, and his wife, Margaret... View Obituary & Service Information

The family of Marcia Anne Gjerde created this Life Tributes page to make it easy to share your memories.

Send flowers to the Gjerde family.