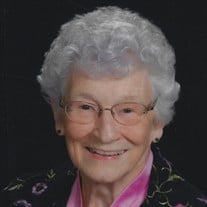 Margaret M. Knobeloch, 87, of Lisbon, passed away Tuesday, August 3, 2021 at her home with her family by her side. Born October 17, 1933 in Hopedale, Il, she was the daughter of Harvey and Bertha (Fein) Graff. She graduated from Minier High School with the class of 1951. Marge married Lawrance Knobeloch on November 5, 1951. They lived most of their married life in Lisbon. For several years she owned and operated Marge’s Draperies and part owner of Unified Supply. She served everyone for many years through various committees, sewing, and baking her famous cinnamon rolls. She is survived by her children, Steve (Peggy) Knobeloch of Sandwich, Jerry (Jody) Knobeloch of Sheridan, Tom (Judy) Knobeloch of Colorado Springs, CO, Jay Knobeloch of Seneca, Julia Elliott of Casey, Il and Suzanne (Steve) Holbrook of Morris; 14 grandchildren; 27 great grandchildren; one great, great grandson; two brothers, Wayne Graff (Igna Bish) of Litchfield, Il and Gerry (Rosemary) Graff of Windsor Heights, Iowa; several nieces and nephews. Preceding her in death were her parents; her loving husband, Larry; granddaughter, Abby; two brothers and three sisters. She was a member of the West Lisbon Church where she served on various committees, Kendall County Home extension and the Yorkville Garden Club. Marge enjoyed baking, sewing, embroidery and spending time with her family, grandchildren and her many friends who were always a part of the family. Memorials may be given to the West Lisbon Church or Lightways Hospice. Funeral services will be held Tuesday, August 10, 2021 at 10:30 a.m. at the West Lisbon Church. Interment will follow at West Lisbon Cemetery. Visitation will be held on Monday, from 5:00 to 7:00 pm. at the church. Fruland Funeral Home , 121 W. Jefferson St., in Morris is in charge of arrangements. For more information, call the funeral home at 815-942-0700 or sign the online guestbook at www.frulandfuneralhome.com.

Margaret M. Knobeloch, 87, of Lisbon, passed away Tuesday, August 3, 2021 at her home with her family by her side. Born October 17, 1933 in Hopedale, Il, she was the daughter of Harvey and Bertha (Fein) Graff. She graduated from Minier High... View Obituary & Service Information

The family of Margaret M. Knobeloch created this Life Tributes page to make it easy to share your memories.

Send flowers to the Knobeloch family.