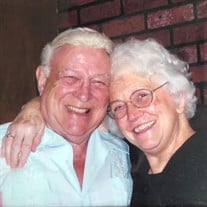 Melvin G. Thompson, 96, of Morris, passed away Monday evening, July 6, 2020 at the Morris Hospital. Born December 24, 1923 in Estherville, Iowa, he was the son of Gerhard and Adda (Jamison) Thompson. He received his education in the schools of Morris. Mel married Eva June Rygs on August 16, 1946 in Morris and they lived all of their married life in Morris. He was a W W II veteran of the U S Navy and served as a merchant marine. He begin his career as a barber in Chicago and worked for several years with Robert Kelly in barbering. Later he started his own barber shop, Mel’s Barber Shop and retired in 2018. He is survived by his loving wife of 73 years, Eva June; two daughters, Lynn (Robert) Valerio and Kim (Don) Shannon both of Morris; five grandchildren, Derek (Jane) Valerio, Kristin (Paul) Ehrman, Amanda (Mark) Reid, Wesley (Kate Carey) Shannon, and Chad (Amy) Shannon; 16 great grandchildren; one sister, Beverly Pulfer of Morris; several nieces and nephews. Preceding him in death were his parents; six brothers, Jerome, Wayne, Lavern, Jody, Glen and Earl Thompson; two sisters, Ellen Broderick and Eleanor Goodwin. He was a member of the First United Methodist Church, American Legion Post 294, John Martin Steele VFW Post 6049 and the Loyal Order of Moose Lodge No. 967. He was a lifelong hunter and an avid reader who loved westerns. He was boxer in his younger days and won the Golden Glove Award. He was happiest when his whole family was together sharing a meal. Anyone who knew him really well knows that he is watching over us and if you listen carefully you can hear him saying “Here we go….”. Funeral services will be held Friday, July 10, 2020 from 11:00 a.m. until time of service at 12:30 p.m. at the Fruland Funeral Home, 121 W. Jefferson St. in Morris with Rev. Robert Sathuri officiating. Military honors will follow and be provided by the Morris Color Guard outside of the funeral home. Inurnment will take place at a later date. For more information, call the funeral home at 815-942-0700 or sign the online guestbook at www.frulandfuneralhome.com.

Melvin G. Thompson, 96, of Morris, passed away Monday evening, July 6, 2020 at the Morris Hospital. Born December 24, 1923 in Estherville, Iowa, he was the son of Gerhard and Adda (Jamison) Thompson. He received his education in the schools... View Obituary & Service Information

The family of Melvin G. Thompson created this Life Tributes page to make it easy to share your memories.

Send flowers to the Thompson family.