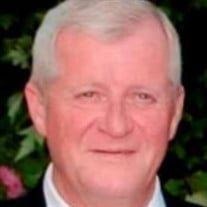 Michael Leo Englert Born: July 31, 1954 Died: August 4, 2020 Michael ‘Mike’ Englert, 66, of Morris passed away in the early hours of August 4th, 2020 at Riverside Medical Center in Kankakee. Private family services will be held at a later date. Fruland Funeral Home in Morris has been entrusted with arrangements. Mike was born July 31st 1954 in Pontiac to John and Shirley (Michaels) Englert. He was raised in Nettle Creek where he was active in 4-H, FFA, baseball, basketball, and track. He graduated from Newark High School in 1972. He completed a degree in Agri-Business from Joliet Junior College in 1974. On October 18th, 1974 he married his high school sweetheart Lois L Voga. Mike lived and worked in the Morris area his whole life. He began his career at Stockdale Fertilizer in Morris and continued his sales work at Anderson Farm Service of Newark. In 1985 Mike and Lois purchased the Morris Dairy Queen. They owned and operated the business, alongside their daughter Jennifer, until his retirement in 2014 where he continued to be a daily presence at the restaurant. Mike was very involved in fundraising efforts for Children’s Miracle Network through the Dairy Queen. Many summers he could be found running concessions for all types of events to fundraise for charity. He organized golf tournaments, and an annual truck raffle for Children’s Hospitals. He received many awards for his charity work, but was never one to brag about his efforts. Mike was an avid NASCAR, Cubs, and Bulls fan. He loved his annual hunting and fishing trips with his brother Jack and his son Michael. His daughter Jacqueline cared for him tirelessly in his final months giving him the dignity he deserved battling dementia. She was always patient and caring and made his final days peaceful. Mike is survived by Lois and their three children Jennifer (Kevin) Duffy and sons Connor and Morgan; Jacqueline (Trent) Heap and step-children Cole Heap-Moore, Ryann (Jake) Bohle, and Brittany (Mark) Kendall; and Michael (Kathryn) Englert and children Eleanor and Wesley. Mike loved his children and grandchildren more than anything in the world. He always attended and encouraged his children in all of their sports and extracurricular activities. His grandchildren were a great source of joy and pride for him and he talked about them constantly. Mike was the first one to lend a helping hand, and care for those in need. He was known for his endless energy and playful sense of humor. He lived a full life, though he was taken from us far too soon. He will be loved and remembered by his family and friends forever. Preferred forms of memorial can be directed to Children’s Miracle Network and the Alzheimer’s Foundation. For more information call the funeral home at 815-942-0700 or sign the online guestbook at www.frulandfuneralhome.com.

The family of Michael Leo Englert created this Life Tributes page to make it easy to share your memories.

Send flowers to the Englert family.