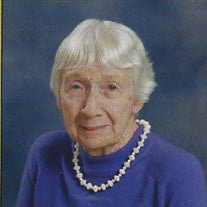 Monica M. Drinan, 102, of Morris, formerly of Kinsman, passed away Wednesday evening, December 2, 2020 at Regency Care of Morris. Born January 18, 1918, she was the daughter of William and Elizabeth (Vint) Slattery. She attended the Buckeye,... View Obituary & Service Information

The family of Monica M. Drinan created this Life Tributes page to make it easy to share your memories.

Send flowers to the Drinan family.