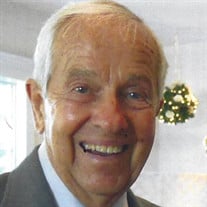 Orin C. Cooper Jr., 91, of Morris, went to be with the Lord on Saturday, June 20, 2020 at his home. Born November 22, 1928 in Hamilton, Ohio, the son of Orin and Thelma(Harris)Cooper Sr. He graduated from Pittsfield High School. He married Ardith Payne on April 15, 1951 and they lived most of their married life in Morris in the house Orin built. Orin was employed for 35 years at the Caterpillar Tractor Company in Joliet. He served in the U.S. Army from 1951 to 1953. He is survived by his loving wife of 69 years, Ardith; two sons, Larry(Ruth Ann)Cooper of Morris and Martin(Diane)Cooper of Estero, Florida; four grandchildren, Benjamin Cooper of Austin, Texas, Teresa(John)O’Grady of West Chicago, Jessica(Timothy)Karales of Yorkville and Vincent Cooper of Morris; two great grandchildren, Sydney O’Grady and Charles Karales; one brother, Arnold Cooper of Quincy. Preceding him in death were his parents; three brothers, Gene, Bruce and George Cooper. He attended Bethlehem Lutheran Church for many years, was very active in the Pro Life Movement, repaired bicycles for Under His Wings, enjoyed bike riding and rode bicycles from Morris to Kentucky Lake with his wife. Memorials may be directed to the Bethlehem Lutheran Church. A very special thank you to caregivers, Gail, Char, Lacey, and many others who have helped over the past 4 years. Also to the Joliet Area Community Hospice for the care they gave Orin and our family. Graveside services will be held Tuesday, June 23, 2020 at 1:00 p.m. at the Sample Cemetery with Pastor Patrick Lohse officiating. Military honors will be provided by the Morris Color Guard. Fruland Funeral Home, 121 W. Jefferson St. in Morris is in charge of arrangements. For more information, call the funeral home at 815-942-0700 or sign the online guestbook at www.frulandfuneralhome.com. .

Orin C. Cooper Jr., 91, of Morris, went to be with the Lord on Saturday, June 20, 2020 at his home. Born November 22, 1928 in Hamilton, Ohio, the son of Orin and Thelma(Harris)Cooper Sr. He graduated from Pittsfield High School. He married... View Obituary & Service Information

The family of Orin C. Cooper Jr. created this Life Tributes page to make it easy to share your memories.

Send flowers to the Cooper family.