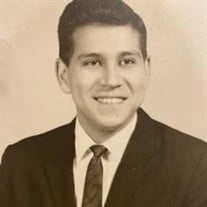 Philip A. Ortiz, O.D. journeyed into the spiritual realm February 15, 2022 after a vibrant life. Born April 15, 1936, he was one of nine children born to Benito and Juana Ortiz, undocumented immigrants who as teens fled violence and poverty of post-revolutionary Mexico. They met in Depue, Illinois at a railroad camp. The family was provided a rail car for housing in exchange for Benito's labor. Those humble beginnings fostered many happy memories and desires. Phil understood one thing - the only way to get out of poverty was hard work and education, and he applied himself in every way possible. He was offered a scholarship to Marquette High School, a private Catholic academy. He was Captain of the varsity basketball team, and in 1954 graduated with honors. Many years later, he was inducted to the Alumni Hall of Fame. It was at a basketball game that Phil first met Gaydeen Horna, a cheerleader from nearby Leland, and they were married in 1958. Their relationship was a successful loving partnership that lasted until Gay's passing in 2006. They built a life together of family, global friendships and a legacy of fun, giving back and enjoying life. It wasn't easy for the struggling young couple during the years Phil attended Illinois College of Optometry in Chicago, working three jobs to take care of his family, which now include daughter Dawn. After graduating in 1963, Phil joined his father-in-law, Dr. Jerome V Horna before starting his own optometric practice in Morris, IL. at the Tratt Clinic and then opening his own building in 1969. The practice grew and underwent 4 major additions. Phil and Gay built a full life in Morris, adding son Tim, growing his practice, supporting Gay in her artistic endeavors, such as "The City Mouse" an iconic 70's dress shop. It was in 1978, Phil journeyed with VOSH "Voluntary Optometry Serving Humanity" on his first eye care mission. He was hooked, and from that year on, Phil Ortiz worked to provide vision to underserved people every day of his life. In 1987, Phil, Gay and the late Dr. Charles Cools decided to create their own non-profit, and co-founded I Care International. Built from a community of volunteers, and fueled by the generosity of service club members from the Lions, Kiwanis and Rotarians around the world. I Care was inspired by Phil's desire to create missions that brought real results in improving people's lives. Fun was always a necessary ingredient, and all missions concluded with notable fiestas! Scores of volunteers joined medical professionals on trips that always included various members of the Ortiz family. In total, it is estimated well over 350,000 people have benefitted in some way from I Care efforts. Phil's contribution to humanity was often recognized, including the Paul Harris Fellowship, Lions Club International, Morris IL Citizen of the Year, to name just a few. In 1992, San Luis Obispo County became a second home for Phil and Gay when Daughter Dawn Ortiz-Legg established her family here, and Phil was right there when granddaughter Georgia’s arrived at Sierra Vista Hospital. Through Phil and Gay’s relationships the central coast also became a second vibrant hub for I Care. Phil inspired a cadre of local volunteers and organizations to do impactful work such creating vocational programs at Paso Robles and Pacific Beach High Schools offering annual student scholarships; working with Cal Poly student volunteers, and supporting the establishment of Noor Clinic’s Optometric services. The Avila Bay Athletic Club and Spa generously offered their location for fabulous I Care fundraisers. In conjunction with Rotary Club of San Luis Obispo, Phil’s last I Care mission was in 2019 to Compostela, Mexico where over 1,800 locals received medical services. Family has always been front and center for Phil, whether it was training brother Tony to become an Optician or having son Tim take over the practice when he retired. He cheered on his grandchildren, great-grandchildren, nieces, and nephews at sporting and varied activities. In his spare time, Phil enjoyed hunting and fishing all over the world. He loved history and had a keen knowledge of cultures around the world and delighted in exploring their music and foods. He took great pride in his garden and loved to share with others. He was known to bring food and goodies to his friends, family, and neighbors—his tomatoes, pies, and usually a watermelon. He was blessed with grandchildren, Laurie (Geno) Woolsey (Mahomet, IL), Taylor (Sean) Hershman (Downers Grove, IL), Ben Ortiz (Denver, CO), and Georgia Legg (San Luis Obispo, CA). He also had great-grandchildren, whom he adored: Addisen, Miles, Erin Woolsey and twins, Quinn and Charlie Hershman. He is survived by his children, Dawn Ortiz-Legg (San Luis Obispo), Dr. Tim (Karen) Ortiz (Morris, IL), grandchildren, great-grandchildren, his brother in law Ray Perez, sister in law Judy Ortiz, many adoring nieces & nephews, and his dear companion of the last several years, Rita DeAngelo. He was preceded in death by his parents, wife Gay, sister Mary Perez , brothers Richard (Dick), Angel, Tony, Dan, Jose, Juan, and David, sisters in law Margaret, Ruby, and Patricia, nephews Rick Perez, Scott Ortiz, and niece Lisa Marie. The family is planning a celebration of life Wednesday June 29 at 3 PM at the Morris Country Club. Memorial donations be made to either I Care International, Marquette Academy in Ottawa, IL or the charity of choice.

Philip A. Ortiz, O.D. journeyed into the spiritual realm February 15, 2022 after a vibrant life. Born April 15, 1936, he was one of nine children born to Benito and Juana Ortiz, undocumented immigrants who as teens fled violence and poverty... View Obituary & Service Information

The family of Philip A. Ortiz created this Life Tributes page to make it easy to share your memories.

Philip A. Ortiz, O.D. journeyed into the spiritual realm February...

Send flowers to the Ortiz family.