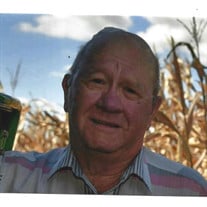 Philip Martin Zink, 81, of Morris, passed away early Saturday, May 15, 2021 at Lightways Joliet Hospice. Born February 10, 1940 in Morris, he was the son of Robert and Anna (Phillips) Zink. He attended Morris schools. He worked at Hornsby’s 5 and Dime, Self Locking, and as a mechanic. He developed a love for farming working for Bill Rehberg Sr. on his farm East of Morris and was finally able to start his lifelong dream on Airport Road farming the Tesdal farm. In 1969 he moved his family to E. Rt. 6 and began farming for the Clifford Collins Farms. He also farmed for the Greenway Family, the Robert Craig Family and the McElavain Family. When the family moved in 1969 he became involved in the school board for Saratoga School. He was on the school board for 20 years, serving many of those as President. He had a good relationship with all the teachers and staff. He loved going into the school and seeing all the kids! He was able to give all of his kids and many of his grandkids their diplomas when they graduated. He also served as the Saratoga Township Road Commissioner for several years. Philip met Shirley Rehberg and they were married May 10, 1958. They were married for 54 years and lived their entire life in Morris. They had 3 children, JoEllyn (Brian) Johnson, Susan (Scott) McNabb and Gary (Wanda) Zink. He had 6 devoted grandchildren, Tom (Robyn) Wills, Tim (Ashley) Wills, His brother Ken (Karen) Zink, Travis (Molly) Wills, Jeremy (Jessica Paulsen) McNabb, Jackie (Andrew) Stoltz and Amber (Matt) Marshall. Philip always said from the day Tom was born” If I knew how much fun grandkids were, I would have had them first!” Philip was also blessed with 18 great-grandchildren ranging from ages 5 to 22 years old. After the passing of his wife, Shirley, Philip married Judy Scaman Hausken on August 17, 2013. That union added 3 step daughters, Dawn (Kevin) Taylor, Stephanie (Pastor Steve) Lombardo, Tiffany (Matt) Dennison, and 7 step-grandchildren. Though their time together was short, it was full of love and fun times! Phil was preceded in death by his parents, his first wife, Shirley, daughter, Susan McNabb and his siblings, Bill Zink and Nancy Day. Funeral services will be held Wednesday, May 19, 2021 at 10:30 a.m. at New Community Christian Church with Rev. Kevin Yandell officiating. Interment will follow in Saratoga Cemetery. Visitation will be held on Tuesday, May 18, 2021 from 4:00 p.m. to 8:00 p.m. at the church. In lieu of flowers, memorials may be given to New Community Christian Church for the Building Fund, Special Connections of Grundy County, Lightways Hospice (formerly Joliet Area Community Hospice) or Grundy County Farm Bureau Ag in the classroom. Fruland Funeral Home, 121 W. Jefferson St. in Morris is in charge of arrangements. For more information, call the funeral home at 815-942-0700 or sign the online guestbook at www.frulandfuneralhome.com.

Philip Martin Zink, 81, of Morris, passed away early Saturday, May 15, 2021 at Lightways Joliet Hospice. Born February 10, 1940 in Morris, he was the son of Robert and Anna (Phillips) Zink. He attended Morris schools. He worked at Hornsby&#8217;s... View Obituary & Service Information

The family of Philip Martin Zink created this Life Tributes page to make it easy to share your memories.

Send flowers to the Zink family.