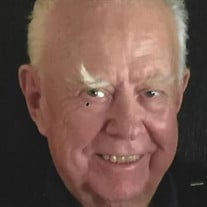 Richard L. Hanson, 82, of Morris, passed away Friday morning, October 9, 2020 at Amita Health St. Joseph Medical Center in Joliet. Born April 6, 1938 in Morris, he was the son of Noble and Margaret (Alsvig) Hanson. Richard grew up on a farm in the Serena, Il area, where he developed a fondness of rural America and agriculture. He later met and married Joyce Sinning on January 13, 1957. While they were both working at Western Electric in Aurora, they mutually agreed he would return to college to improve their lives. Richard started at the University of Illinois in the ROTC program and later transferred to Illinois State University where he graduated, settling in Newark to raise his family. He started working as an underwriter for Farmers Insurance Group in Aurora, Il, but soon begin his career in teaching. He spendt his teaching career at Nettle Creek School, where he developed lasting relationships with most of his students. The students admired and respected “Mr. Hanson”. He later took pleasure in meeting former students and their families as he ran errands in the Morris area. Richard and Joyce professed their faith early in their married life. He never wavered from his love for God or his dedication to his faith. He loved the Lord, family and friends, in that order. Richard enjoyed traveling with his wife, following the Cubs, helping his sons with their car projects, collecting arrowheads, barbecues at his children’s and keeping up with all the activities of his grandchildren. Living most of his life in Newark, Richard and Joyce moved to Morris in recent years to be closer to family and friends. They made many new friends in the 20 years they have lived in Morris and Richard will be greatly missed by all. He was preceded in death by his parents; a brother, Walter Hanson; a sister, Joan Rueles. He is survived by his wife, Joyce; his sons, Rick (Deb) Hanson and Wes (Becky) Hanson both of Morris; two daughters, Corrinn (Larry) Wayman of Roscoe, Il and Kathy (Ken) Knudson of Serena; seven grandchildren; four step-grandchildren; two great-grandchildren and ten step-great grandchildren; his brother, Gerry Hanson of Bristol. A private graveside service for the family will precede interment at West Lisbon Cemetery. Fruland Funeral Home, 121 W. Jefferson St. in Morris is in charge of arrangements. For more information, call the funeral home at 815-942-0700 or sign the online guestbook at www.frulandfuneralhome.com.

Richard L. Hanson, 82, of Morris, passed away Friday morning, October 9, 2020 at Amita Health St. Joseph Medical Center in Joliet. Born April 6, 1938 in Morris, he was the son of Noble and Margaret (Alsvig) Hanson. Richard grew up on a farm... View Obituary & Service Information

The family of Richard L. Hanson created this Life Tributes page to make it easy to share your memories.

Send flowers to the Hanson family.