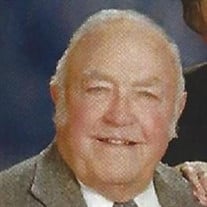 Richard E. McTague, 92, of Morris, passed away early Tuesday morning, December 8, 2020 at the Morris Hospital. Born March 25, 1928 in Morris, he was the son of Fabian and Olive (Patton) McTague. He graduated from Morris Community High School with the Class of 1946. He served in the United States Army from 1950 to 1952 in Korea. Dick received his Civil Engineering degree from Chicago Technical College. He worked for the State Department of Highways as a Civil Engineer for four years. In November 1959, he was appointed the Grundy County Superintendent of Highways, a positon he held until his retirement in 1989. Dick was the beloved husband of 62 years to Merle Aschenbrenner, whom he married August 3, 1958; loving father of Mark McTague and Lynne (Mike) Malone; proud grandfather of Megan and Madison Malone. He enjoyed attending his granddaughters’’ school and sporting events. He was an avid fan of the Newark Lady Norsemen Volleyball team that his granddaughter, Madi, is a part of. He was able to recount all of Madi’s volleyball statistics from memory. He is survived by his wife, Merle; his daughter, Lynne (Mike) Malone; his granddaughters, Megan and Madison Malone. He is survived by his sister-in-law Geraldine McTague and many dear nieces and nephews. He is preceded in death by his parents; son, Mark; siblings, Maxine (Dale) Brooks, Doris (Bert) Tucker, Gerald McTague, Bonnie McTague. And Joanne (Ken) McNeely. Dick was a member of the Bethlehem Lutheran Church where he was a trustee and usher. He enjoyed music and singing. He was a member of the Morris Country Club and was an avid golfer. Dick was a devoted fan of the Morris Redskins, the Chicago Cubs, and the Newark Lady Norsemen. He enjoyed spending his mornings with his dear friends at the coffee group. Dick loved to tease and joke with his friends and strangers. He was known for his fun-loving personality and infectious laughter. Memorials may be made to the Bethlehem Lutheran Church. Private graveside services will be held for the family at a later date. Fruland Funeral Home 121 W. Jefferson Street in Morris is in charge of the arrangements. For more information call the funeral home at 815-942-0700 or sign the online guestbook at www.frulandfuneralhome.com

Richard E. McTague, 92, of Morris, passed away early Tuesday morning, December 8, 2020 at the Morris Hospital. Born March 25, 1928 in Morris, he was the son of Fabian and Olive (Patton) McTague. He graduated from Morris Community High School... View Obituary & Service Information

The family of Richard E. McTague created this Life Tributes page to make it easy to share your memories.

Send flowers to the McTague family.