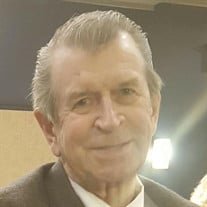 Richard L. Norris, 78, of Morris, passed away Tuesday, August 10, 2021 at Lightways Hospice in Joliet with his family by his side. Born January 23, 1943 in Morris, he was the son of Nelson and Clara (Thompson) Norris. He graduated from Morris Community High School with the class of 1961. He served in the U S Army Reserves for six years. He married Paula Hibler on October 9, 1992 in Morris and they lived all of their married life in Morris. For several years he was employed as a meat cutter at Kroger’s in Morris, Kewanee and Clinton, and later as a mechanic at Wills Automotive and D Construction where he retired from in 2013. He is survived by his loving wife of 29 years, Paula; his children, Troy Bree of CT, Heather Norris of Ct and Aaron Norris of Ct.; four grandchildren, Rishard (Carleen), Niko, Olivia and Cheyenah; three sisters, Carol (Harold) Breen of Morris, Mary (William) Smith of Minooka and Kathy (Robert) Wills of Morris; brother-in-law, Ralph Hibler of Minooka; several nieces and nephews; his best friend “Charlie”. Preceding him in death were his parents; his sister, Jule (Paul) Ostrem. He was a member of the Fraternal Order of Eagles No. 1024. Rich was a Chicago Bears fan, an avid gardener, enjoyed cooking and grilling, restoring old cars and an avid fan of native American culture. Memorials may be given to the donor’s choice. Funeral services will be held Friday, August 13, 2021 at 11:00 a.m. at the Fruland Funeral Home, 121 W. Jefferson St. in Morris with Pastor Steve Larson officiating. Interment will be at West Lisbon Cemetery. Visitation will be held on Friday at the funeral home from 9:30 a.m. until time of service. For more information, call the funeral home at 815-942-0700 or sign the online guestbook at www.frulandfuneralhome.com.

Richard L. Norris, 78, of Morris, passed away Tuesday, August 10, 2021 at Lightways Hospice in Joliet with his family by his side. Born January 23, 1943 in Morris, he was the son of Nelson and Clara (Thompson) Norris. He graduated from Morris... View Obituary & Service Information

The family of Richard L. Norris created this Life Tributes page to make it easy to share your memories.

Send flowers to the Norris family.