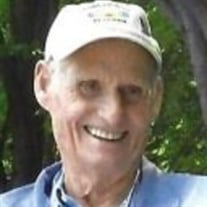 Robert Allan Craig, 87, of rural Morris, passed away Friday morning, March 20, 2020 at the home of his daughter, Kim. Born April 21, 1932 in Morris, he was the son of Donald and Esther(Helgevold)Craig. He lived in Grass Valley, CA form 1944 - 1947 and returned to Morris to graduate from Morris High School. He was a veteran of the US Army and served in the Korean War from 1953 – 1954. Bob married Nancy Busaytis on June 19, 1955 at Immaculate Conception Catholic Church in Morris. He farmed for 51 years in Saratoga Township where he and his wife raised Arabian horses and Bob would show them at horse shows. He is survived by his loving wife, Nancy of Morris; his children, Robert(Janet)Craig Jr. of Morris, Gary(Ramona)Craig of Minooka, Karen Craig of Minooka, Kim(Terry)Gang of Morris, Joyce(Joe)Turk of Holland, MI and Jeff(Julie)Craig of Morris; his grandchildren, Derek Gang, Nikki(Jon)Walsh, Jennifer Applebee, Bryan(Jessica)Craig, Jaclyn Turk, David Turk, Katie Craig and Neva Morris; five great grandchildren and numerous friends. Preceding him in death were his parents. He was a former member of Saratoga School Board for 10 years and as president for I year, Saratoga Township Trustee for 10 years and road commissioner for Saratoga Township for 8 years. Bob for years met friends at R-Place for early morning coffee, enjoyed taking his boat out on the Illinois River for fishing and taking his dog “Sonny” for many walks to Starved Rock State Park or to the Fox River. Memorials may be directed to the American Heart Association or donor’s choice. Private graveside services will be held Wednesday at Mt. Carmel Cemetery. Military honors will be provided by the Morris Color Guard. Fruland Funeral Home , 121 W. Jefferson St., in Morris is in charge of arrangements. For more information, call the funeral home at 815-942-0700.

Robert Allan Craig, 87, of rural Morris, passed away Friday morning, March 20, 2020 at the home of his daughter, Kim. Born April 21, 1932 in Morris, he was the son of Donald and Esther(Helgevold)Craig. He lived in Grass Valley, CA form 1944 -... View Obituary & Service Information

The family of Robert Allan Craig created this Life Tributes page to make it easy to share your memories.

Send flowers to the Craig family.