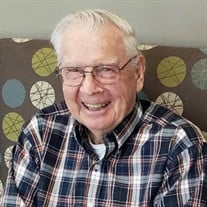 Robert J. Stangland, 96, of Morris, passed away Monday, August 10, 2020 at his home. Born February 7, 1924 in Morris, he was the son of Severt and Nora (Danielson) Stangland. He graduated from Newark High School. He married Betty Johnson on April 23, 1955 at the Bethlehem Lutheran Church in Morris. For all of their married life they farmed in Nettle Creek Township until moving to Morris in 2004. Bob was a proud WW II veteran, where he served as Staff Sargent in the 73rd Bombardment Wing stationed in Saipan. His crew successfully completed over 30 missions. He was awarded several medals including the Distinguished Flying Cross. The 73rd Wing held several reunions and Bob enjoyed reuniting with the Crew of the Star Duster and other members of the division. On February 20, 2019, Bob served as the WW II Veteran representative in the Color Guard for the Chicago Blackhawks game. He enjoyed sharing his experiences with friends and family. He participated in the Honor Flight to visit Washington, D.C. He is survived by his loving wife, Betty; his son, Gary (Jan)Stangland of Cedar Rapids, Iowa; six grandchildren, Jenna and Keil Stangland, Tim Stangland, Crystal (Ed) Kelly, Michael Dunn and Krystal (Darren) Howard; eight great grandchildren; several nieces and nephews. Preceding him in death were his parents; his daughter, Susan Dunn ; His son, Timothy Stangland; three brothers, Sherman, Howard and William Stangland; one sister, Margaret Dukerschein. He was a lifelong member of the Stavanger Lutheran Church where he was an active member of the church council. He enjoyed golfing, bowling and was a Chicago Cubs fan and enjoyed golfing at Prairie Lake. Memorials may be directed to the Stavanger Lutheran Church, Morris Public Library or Joliet Area Community Hospice. Private graveside services for the family will be held on Friday at Evergreen Cemetery in Morris with Rev. Philip Peterson officiating. Military honors will be provided by the Morris Color Guard. Fruland Funeral Home, 121 W. Jefferson St. in Morris is in charge of arrangements. For more information call the funeral home at 815-942-0700 or sign the online guestbook at www.frulandfuneralhome.com.

Robert J. Stangland, 96, of Morris, passed away Monday, August 10, 2020 at his home. Born February 7, 1924 in Morris, he was the son of Severt and Nora (Danielson) Stangland. He graduated from Newark High School. He married Betty Johnson on... View Obituary & Service Information

The family of Robert J. Stangland created this Life Tributes page to make it easy to share your memories.

Send flowers to the Stangland family.